Earlier this week, President Obama signed the Dodd-Frank Wall Street Reform and Consumer Protection financial reform bill into law initiating a sweeping reform of financial regulation. While the new legislation is meant to target big banks, it turns out that many small businesses may also be affected. 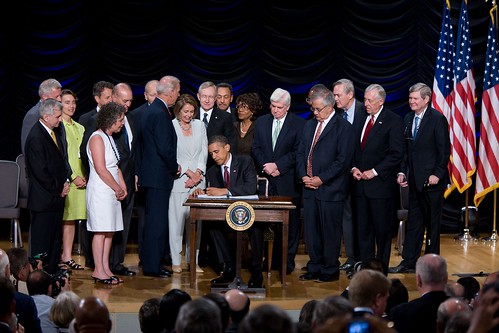 The bill’s provisions attempt to protect consumers by regulating lenders. Any business that permits payments in more than four installments or assesses late fees will be considered a lender. Of course, that applies to any small business that competes with big businesses by offering short-term credit to loyal customers.

Both business owners and customers may feel the pinch when the bill goes into effect. Small businesses will be forced to use an approved bank to offer payment plans instead of just offering credit on their own. Owners will have to pay bank fees, and customers will run the risk of being denied credit.

This possibility has not gone unnoticed. A survey by the U.S. Chamber of Commerce has found that 57% of small business owners lack confidence in the financial reform legislation. In fact, they fear it will not prevent another financial industry meltdown.

According to U.S. Chamber of Commerce president Thomas J. Donahue, growth and jobs in small businesses will suffer when this bill is implemented. He views the increased costs of regulation and insurance as detrimental to the economy. As access to credit becomes more elusive, small businesses will have more difficulty growing.