There is a lot of difficult news out there these days. With all the talk about pension cuts, pay freezes, layoffs, bankruptcies, and government bailouts, the fact that some industries are not only surviving the recession, but thriving in it, may seem hard to believe. But the truth is that in the midst of all the economic turmoil, there are industries that are prospering. Some of these businesses are typical recession-busters, others are particular to the current recession.

When the going gets tough, the sweet tooth gets going. Inexpensive candies, snacks, and treats become the comfort of many as people try to deal with hard times. In addition to a number of candy manufacturers and distributors around the country reporting a significant increase in sales, Nestle and Cadbury have both reported profits. Ice cream sales are also up among independent parlors as well as name brands, such as Häagen-Dazs and Ben and Jerry’s.

Hollywood is profiting from the recession enjoying one of its biggest years ever in box office sales to the tune of $10 billion. The video gaming industry is also are experiencing a surge in demand. Most notably, in the first week of sales Grand Theft Auto IV, produced by Rockstar Entertainment raked in some $500 million.

This one seems a bit counter-intuitive at first. As the recession drags on, one would expect the sales of consumer electronics to drop across the board. While there has been a slowdown in some areas, several companies are reporting a surge in sales. Sales of Apple’s iPhone 3GS out-performed analyst expectations by as much as 50%. Sales of netbooks have also been brisk. 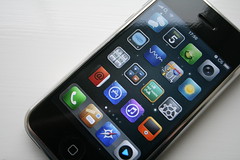 In general the IT sector is going strong specifically in areas of data storage, processing, and management as well as software design and development, networking and systems administration.

A little indulgence can go a long way. While high-end consumer products are having a hard time moving in the recession, a range of cheap, feel-good items are experiencing brisk sales. Low-cost cosmetic lines for products such as lipstick and lip balm, anti-aging creams, and self-tanning creams are predictably on the rise. Wholesale beer sales are also doing well. Most notably, Anheuser-Busch, the biggest brewer in the United States, has been reporting a profit despite concerns that rising costs for raw materials like glass, barley, wheat, and fuel would undermine any gains. Finally, tobacco sales across the nation going strong. 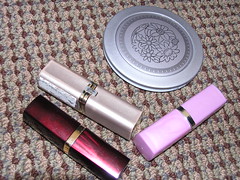 5. Profiting from the Damage

As people across the nation try to get a grip on their mounting debt, it is no surprise that repossession firms, auctioneers of foreclosed homes, debt consolidation companies, debt consultants, collection agencies, and bankruptcy lawyers all have plenty of work these days to keep themselves busy. There have also been a surge in the creation of companies that handle the clean-up and refurbishing of foreclosed homes and their surrounding property. Though these industries may be looked upon as scavengers profiting from the downtrodden, who is going to argue with the fact that someone has to do it.

Call them loan sharks or predatory lenders… but they are still legal. And right now business is booming for the payday loan industry as consumers try to cover their cash shortfall with these high interest, short-term loans. 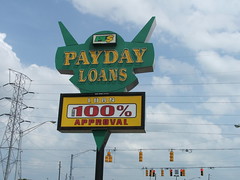 Though the health care industry as a whole is experiencing cutbacks, as the baby boomer generation gets older there has been an increased demand for home health care services and specialized medical procedures generally performed in small outpatient clinics and doctor’s offices. This has increased the need for qualified nurses and specialized doctors.

As household budgets get tighter, consumers are flocking to discount retailers, such as Wal-Mart and Dollar General. Thrift stores and Goodwill stores across the country are also drumming up traffic even as sales among other retailers have plummeted .

The demand for online degrees, professional certification, and continuing educational programs have all increased. As more and more American workers are laid off (or fear being laid off), many are are seeking re-education opportunities. The trend is also likely due to the increasing cost of higher education that has out-paced inflation for several years in a row. Although quality online degrees still require a significant investment of money, when you factor in the savings from room and board as well as scheduling flexibility, in the end an online degree comes out much cheaper.