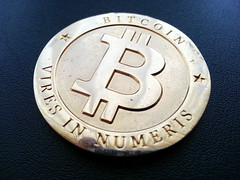 Bitcoin, the newest variation on the e-wallet theme, is making a lot of noise these days. That’s not the jingling of loose change – Bitcoin is strictly a virtual currency – but rather the vociferousness of the arguments for and against this peer-to-peer electronic payment system. A closer look at Bitcoin, together with its pros and cons, is in order.

What’s It All About?

The idea behind Bitcoin first saw the light of day in 2008, in a paper authored by a mysterious individual or group using the pseudonym Satoshi Nakamoto. The motivation was to transfer value remotely via computer, smartphone or tablet independently of any central authority.

As a payment method for goods or services, Bitcoin acts as an alternate form of currency. Unregulated and based on complex algorithms, Bitcoins are seen by some as the wave of the future and by others as the next great American financial disaster in the making.

Small Business on the Bitcoin Bandwagon

Small businesses are leading the way in accepting this new invention, as they have more flexibility to update their processes than larger firms. Many entrepreneurs see distinct advantages in accepting Bitcoin over conventional payment methods.

The High Cost of Getting Paid

Traditional customer payment methods each have their own costs. For example, credit card charges place a heavy financial burden on business owners and approximately one in 100 credit card sales end up as chargebacks – charges disputed by the cardholder for which the merchant takes a loss. While cash may seem a simpler alternative, it must be counted, balanced and physically transported to the bank. It is also something fewer people are carrying around with them these days.

Bitcoin services, however, cost about 1% of sales, in contrast with approximately 3% for credit cards. Transactions may not be simply dissolved by an unhappy customer – a refund process must be requested from the merchant. There is also the additional benefit that Bitcoin currency can’t be casually siphoned off from your cash drawer.

Bitcoin transactions are faster, meaning you end up with money in your pocket much more quickly than waiting to be reimbursed by the credit card companies. Ultra-portable and simple for consumers to use, Bitcoin also facilitates profitable impulse purchases.

Geeks love Bitcoin’s bleeding-edge technology and even those without an advanced degree in Computer Engineering think it’s kinda cool. This cachet may serve as a business advantage, helping a small enterprise stand out from the competition as modern and dynamic in customers’ perception.

Consumers enjoy the ease of buying and selling Bitcoin on the Internet. Payment in land based stores is equally hassle-free; all it takes is a smartphone to scan the retailer-provided QR code.

Too Good to Be True?

So what’s the catch? Still in its infancy, Bitcoin is experiencing growing pains. The currency fluctuated dramatically in value over the past year – soaring from $5 to $266 and back down to $103. Even more alarming, customer withdrawals of Bitcoin funds in US dollars were temporarily put on hold in mid-June 2013 for system “upgrades.”

Banking regulators are looking askance at the new currency system, warning that users will be penalized if they breach state money-transmission laws. Senior Counsel Paul T. Crayton of the California Department of Financial Institutions recently warned the Bitcoin Foundation of potential fines of $1,000 per violation or per day for transmitting money without a license.

Last but not Least

One of the simplest but most cogent arguments against gung-ho adoption of Bitcoin is simple – not enough other people are using it. Accepting Bitcoin from your customers isn’t worth a hill of beans if you can’t then turn around and use the currency to pay your suppliers and landlord. True, you can convert the contents of your Bitcoin wallet into dollars for payment purposes, but that detracts enormously from the convenience of the system.

You Be the Judge

So the jury is out on Bitcoin. Weighing the pluses and minuses of this radical new system, you decide whether Bitcoin is right for your business.