Does the daily grind of running a small business leave you feeling like you need a little inspiration? Here is a star-studded line-up of the most influential celebrities in business. Some of these pop icons basking in the limelight have used their personalities and business acumen to become successful business tycoons; others are savvy entrepreneurs who used their personalities and business acumen become celebrities.

I complied this list with the aid of a poll conducted by Youngentrepreneur.com earlier this year as well as the Forbes Celebrity 100.

1. Sir Richard Branson. With his boyish enthusiasm, this English entrepreneur has built an empire of over 360 companies belonging to his trademark Virgin brand. Branson began his business career at the age of 15 with the publication of a magazine called Student. In 1972, he opened his well-known chain of record stores, Virgin Records, that became Virgin Megastores and later zavvi in late 2007. Branson’s Virgin brand grew rapidly during the 1980s to include Virgin Atlantic Airways and expanded the Virgin Records music label. Recent endeavors include: Virgin Galactic where passengers can travel in suborbitol space, Virgin Comics, and Virgin Health Bank. 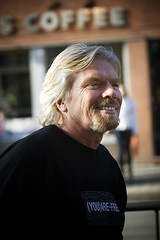 2. Bill Gates. Though you may question his future as an actor after his recent appearance with Jerry Seinfeld in a series of Microsoft commercials, it is well known that Bill Gates has played a pivotal role in advancement of personal computing. Gates is currently chairman of Microsoft, the software company he founded with Paul Allen. During his career at Microsoft he has held the positions of CEO and chief software architect, and he remains the largest individual shareholder with more than 8 percent of the common stock. He is also well known for his philanthropy. In 2000, he and his wife Melinda established the Bill and Melinda Gates Foundation, which is considered one of the largest charitable foundations in the world.

3. Donald Trump. Trump may be as well known for his bold, flamboyant, and extravagant style as he is for the success of his business pursuits. An American business executive, entrepreneur, television and radio personality and author, Trump is currently the CEO of Trump Organization, an American-based real estate developer, and the founder of Trump Entertainment resorts, which operates several hotels and casinos around the world. In recent years, his fame increased after the success of his reality television show, The Apprentice, that he both hosts and produces.

4. Warren Buffet. Buffet is one of the world’s most successful and well-known investors. Earlier this year Forbes ranked him as the richest man in the world with an estimated net worth of $62 billion. Buffet is currently the largest shareholder and CEO of Berkshire Hathaway and an avid philanthropist.

5. Oprah Winfrey. Oprah Winfrey rose from a life of hardship and adversity to become one of today’s most influential TV hosts and media moguls. She is considered one of the richest African Americans of the 20th century, and earlier this year Forbes ranked her as the most powerful celebrity in the world. In addition to publishing two magazines, she runs her own production company and will soon debut the Oprah Winfrey Network in collaboration with Discovery Communications.

6. Simon Cowell. You may not agree with Simon Cowell’s unapologetically blunt comments and criticisms, but it is hard to deny his fame, fortune, and shrewd business sense. He is currently an A&R executive for Sony BMG in the United Kingdom, a television producer and owner of the music publishing house Syco. Cowell is most well-known as a brazen judge on television programs such as Pop Idol, The X Factor, American Idol and Britain’s Got Talent.

7. Jay-Z. Jay-Z is a prolific rapper who has become one of America’s most financially successful music artists and entrepreneurs. In addition to releasing several acclaimed albums, such as Blueprint and Kingdom Come, he is the former president and CEO of Def Jam Recordings and Roc-A-Fella Records. He also has part ownership in the 40/40 Club and the NBA’s New Jersey Nets.

8. Justin Timberlake. After rising to stardom as one of the lead singers for the boy band ‘N Sync, Timberlake has used his fame and talent to become a successful entrepreneur. His ventures include: the William Rast fashion line, Tennman Records, and co-ownership in three restaurants.

9. Steven Spielberg. Very few in the motion picture industry can claim the kind of longevity and influence held by Steven Spielberg. As director, screenwriter, and producer, his movies have set the standard for Hollywood film making across several decades and many genres. In 1994, Spielberg created his own studio DreamWorks which produced several blockbuster hits, such as The Lost World: Jurassic Park and Saving Private Ryan. Spielberg has also been dabbling in the gaming industry. His first offering, Boom Blox, which he developed in collaboration with Electronic Arts, was released in May.

10. 50 Cent. After rising to the top of the charts with with the release of his two albums Get Rich or Die Tryin’ and The Massacre, 50 Cent established himself as a successful entrepreneur and executive producer. His ventures include the G-Unit clothing line and record label and a vitamin water drink called Formula 50. Last summer, 50 Cent reportedly earned $100 million after taxes last when his stake in VitaminWater parent Glacéau was bought by Coca-Cola.

11.Tyra Banks. Although she has retired from modeling, Tyra Banks’ influence and business sense is going strong. Over the past two years she has devoted herself to her two successful TV programs, America’s Next Top Model and her Oprah-style talk show- both of which are owned in part by her production company, Bankable Productions. Other shows are in the works, such as the reality series Stylista, which will debut in the fall on CW.

12. Mary Kate and Ashley Olsen. Shortly after their joint appearance as Michelle Tanner in the television series Full House, the Olsen twins founded a company called Dualstar and started promoting their own brand. For nearly a decade beginning in the late 90’s, their images could be found on a host of merchandise including: clothes, books, toys, fragrances, and posters. Recently, they have been promoting their new upscale clothing line, Elizabeth & James.

13. Gisele Bündchen. With an estimated $35 million in earnings last year, Forbes named Gisele Bündchen the world’s highest-paid supermodel. Though her striking appearance may be her biggest asset, she has also made herself a name as sharp businesswoman. In addition to her numerous advertising and modeling contracts, a large portion of Bündchen’s income (about $8 million) comes from her own line of sandals produced by Brazilian sandal-maker Grendene. Other ventures include a licensing deal with Luxottica’s Vogue Eyewear and ownership of Brazil’s posh Palladium Executive Hotel.